Ultimately, I think, gardening speaks to a deep-seated (deep seeded?) desire to experience the real, the essential, the astonishingly possible. To garden is gradually to give up control, to fall to one’s knees and come into closer and closer contact with the tremendous and often bewildering beauty of the living world. Nothing, you find, is at all what you thought it was. Dirt is not dirt, but a teeming mass of microorganisms that turns death back into life.”

I once read an article called “Making beds & Making beds.” The article spoke to the benefits of making your bed in the morning, from spreading the seeds to a productive day to getting a good night’s sleep.

Then the article took a detour to explain how preparing your garden beds at the beginning of the season is the foundation for a productive growing season.

As a herb grower, I agree!

The herbs and vegetables you grow, reflect your soil’s quality!

Building the vitality of the soil is a hot topic of discussion amongst biodynamic farmers. There is an agreement that vital soil is the ground from which plants can grow and thrive.

What do I mean when I speak about the vitality of the soil?

Healthy soil is a balanced ecosystem where large animals such as snakes, squirrels, and wild turkeys and smaller organisms such as earthworms, bugs, spiders, microorganisms, bacteria, and viruses exist in harmony.

Every living being in the soil has its role in enhancing the life of the soil by breaking down (digestion) and eliminating (compost). The microorganisms play a role in “cooking” minerals and “serving” them to plants. If your soil is high in minerals but low in microorganisms, your plants do not have access to these minerals.

Research shows a reduction in minerals including sodium, potassium, calcium, magnesium, phosphorus, iron, zinc, copper, and manganese in vegetables. A landmark study by Donald Davis and his team found “reliable declines” in the amount of protein, calcium, phosphorus, iron, riboflavin (vitamin B2), and vitamin C over the past half-century.

Modern farming practices, specifically the use of toxic chemicals and heavy tractors on the fields eradicate the organisms which results in food and medicine that is nutrient depleted.

The Role of the Gardner in enlivening the soil

Compost is a mysterious process of death and resurrection. How appropriate it is then that in the spring, the season of resurrection, we sift the compost through a metal sieve.

One year as my daughter, who was ten at the time, and I were sifting the compost, she complained about needing to touch the slippery worms. So I told her that she should be grateful because while now they “cook” the food for us after we die, we serve as their food. (talk about childhood trauma 😏)

This sentiment was expressed by gardener Wendy Johnson, who wrote in her book “Gardening in the Golden Gate.”

“The word “hummus” has many deep, old roots and connections. In Latin, hummus means “earth,” “ground,” and “soil.” But it also shares the root for humankind, humane, and exhume, words buried in earth roots. Humble, humiliate, humorous derive as well from this same fertile root word, as do humid and hubris. I love this richness: it matches humus itself. Yet it is humiliating to know so little about this humid, moist, dark brown culture of humus that supports our life, this culture so humbling in its elasticity and mysterious nature, and so deeply deserving of humane attention.”

Building a compost pile is a process that involves the threefold human being:

There is a science to the compost pile, which involves a 25:1 proportion of carbon to nitrogen. Do not feel discouraged; it all comes down to a simple recipe (please see below) and practice.

Rudolf Steiner once said that the most important work done in the garden is done during the winter when the garden is dormant. The gardener sets their hope and intention for the coming growing season. While you make your compost pile try to be fully immersed in the process and pay attention to details.

Preparing a compost pile, very much like cooking, is a work of art. Even if we all use the same ingredients in the same proportions, we will end up with slightly different compost. No one compost will be better than the other, just different.

For healthy compost, you want to create a ratio of 25:1. The carbon (dry brown) should be the foundation of your compost with some added nitrogen (green or wet) to ignite the fire that will create warmth for the fermentation process. 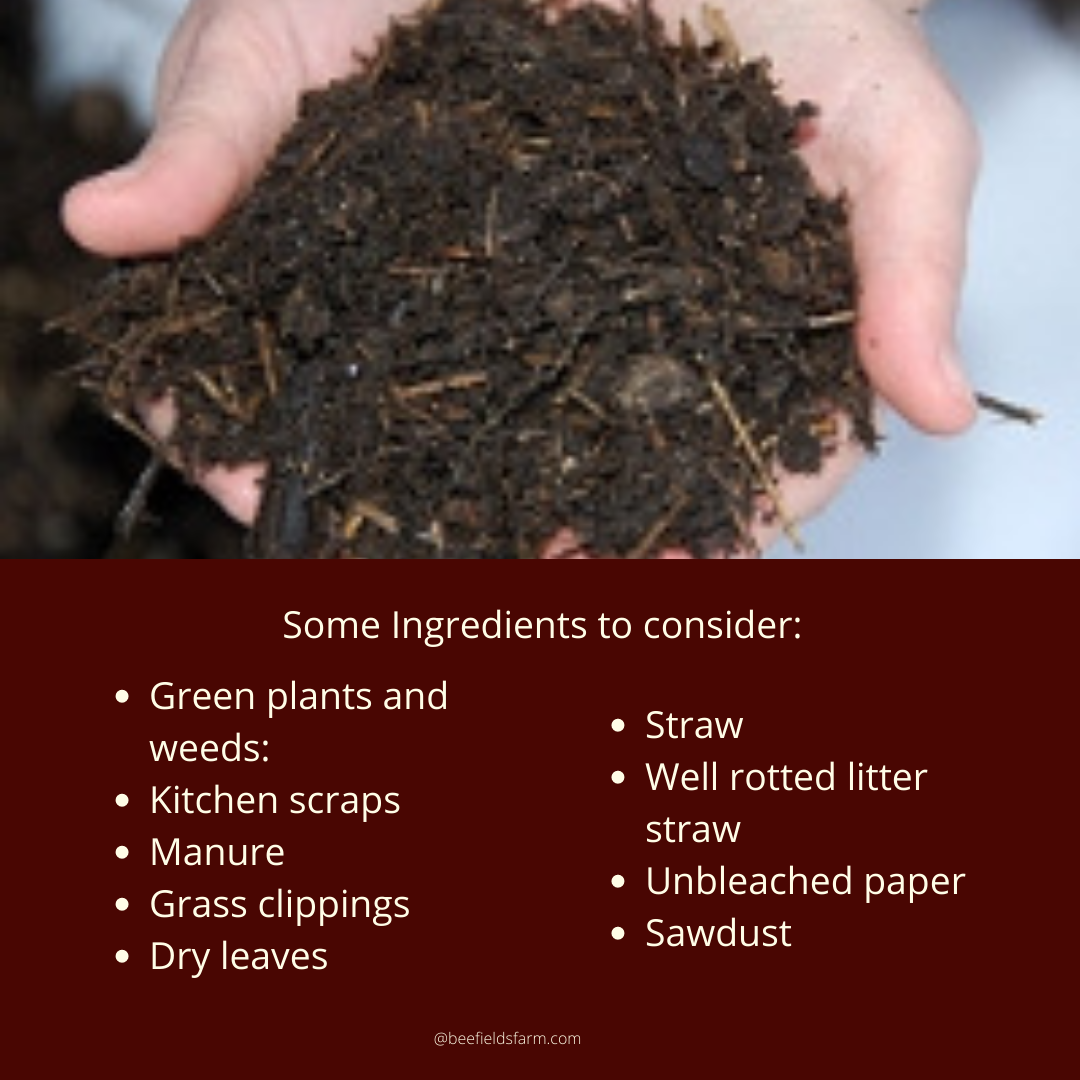 Adopted from the book “How to Move like a Gardner” by herbalist Deb Soule.

We use a big animal cage to hold our kitchen scraps until broken down. That prevents it from attracting small animals like rats. Once a year, at the end of summer, we mix the now broken down kitchen scraps with plants that we uprooted from the garden (annuals that will die anyway in the winter), manure, dead leaves, and mulch.

If you do not have any animals in your garden, I suggest that you post on social media and ask your neighbors about chicken, horse, or goat manure that they will be willing to share with you. We met so many kind people that were grateful to let us take manure from their yards. Do not forget to ask about the use of antibiotics and growth hormones.

Your compost heap should not be wider than 5-6 feet or taller than 6-7 feet.

We then cover the compost with a black breathing tarp and let it sit for two years before we use the compost. You can accelerate the process by turning the compost, bringing air into the pile, and quickening the fermentation process. We turn our compost twice a year in the spring and in the fall, at which time we add the Biodynamic compost preparation.

In ancient times, people understood that our survival as a species and the survival of the Earth depended on the health of the soil. One example is this excerpt out of a Sanskrit text from about 1500 BC:

“Upon this handful of soil, our survival depends. Husband it and it will grow our food, our fuel, and our shelter and surround us with beauty. Abuse it, and the soil will collapse and die, taking humanity with it.” 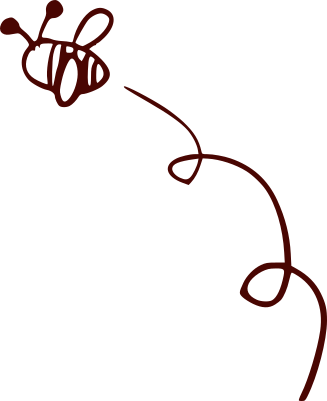 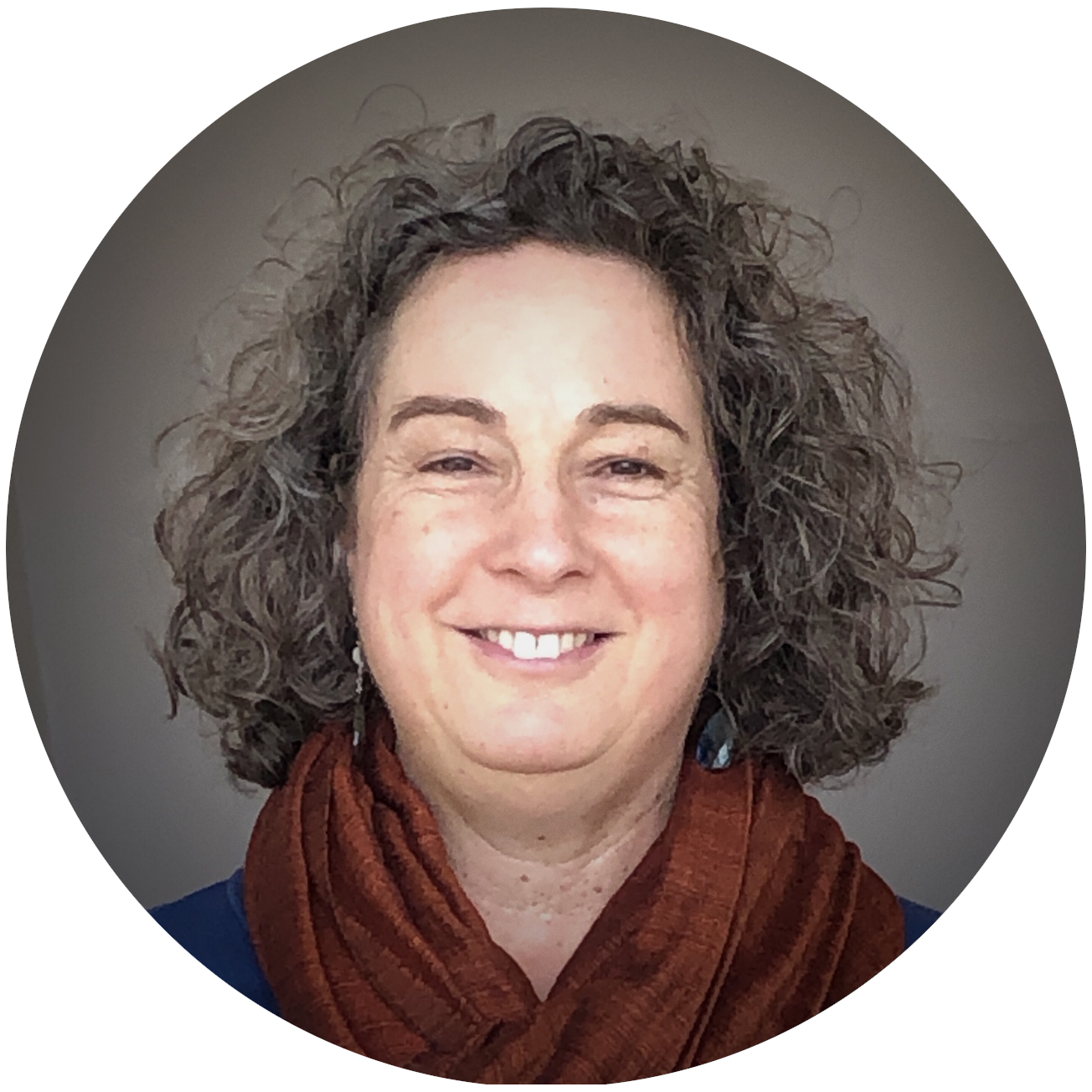 Have you ever gone on the diet rollercoaster? Yo

Join me on Friday for a conversation about self ca